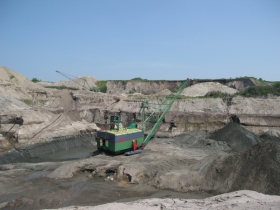 Kaliningrad Amber Factory was established on July 21, 1947. It is operating on the basis of the largest in the world amber deposit located on the Baltic seacoast near the village of Yantarny.

The amber is extracted in the open-cast mine at the depth from 12 to 50 meters. At present 400-500 tons of amber are extracted. All the extracted amber is divided into three classes: for making articles, to be pressed, and to produce lacquer.

The amber for making articles is of the greatest value, it is used as raw material for the jewellery industry. However, this kind of amber accounts for only one tenth of the extracted amber. The other small pieces can not be immediately used for making articles, they are pressed (30%) and chemically treated (60%). Pressed amber is used for producing adornments and it is used as insulators in industry. The products of chemical treatment – «the fused amber» and amber oil become ingredients of various sorts of high quality lacquers and enamels. Amber acid is used for making medicines, chemicals for producing leather substitutes, biogenic stimulants. 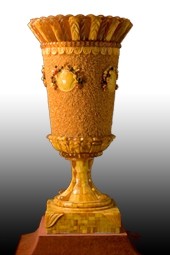 The largest part of the Factory’s output are amber goods produced in mass batches. During its operation the Factory has produced dozens of millions of jewelry articles. In the first years the range of the output was quite uniform. It mainly comprised of beads, bracelets, pendants, cigarette-holders, clips, buttons. The adornments were quite often made in the form of leaves, berries, fruits, insects. The amber was tinted to make it look more natural.

Along with the mass production the artists of the Factory created in those years a whole range of thematic compositions, monumental vases, gorgeously decorated caskets and souvenirs. Among them is the vase «Abundance», the model of the nuclear-powered ice-breaker «Lenin» and the clock «Epoch» rich in numerous details.

In the 1960s under the influence of the Baltic traditions of amber treatment the craftsmen started to use natural forms of amber, to pay attention to its colour and texture, to make various compositions, to combine amber with other materials (wood, wool, plastic).

In the 1970s amber had reached the peak of its popularity in the USSR. The real «amber boom» was connected with the use of gold in combination with amber. In such articles they often use red-hot amber that is made by being treated in special autoclaves. Dull and dirty-yellowish pieces of amber turn into transparent and sparkling stones that perfectly go together with gold.