Amber in the antiquity and in the middle ages

Amber became a household item of the people living on the Baltic sea coast in the Late Stone Age – in 4000 BC.

People learned to treat it with flint and ivory tools – to grind it, to saw it up, to drill it, and they made different adornments and amulets in the form of figures of men and animals.

As early as in the antiquity amber was a most important item of exchange that was popular far beyond the bounds of the Baltic sea region. Thanks to the archaeological diggings and the data from the records the scientists managed to identify the trade routes along which amber was traded from the Baltic to the countries of ancient civilizations.

The information about the «gold of the North» can be found in the antique records.

Thus, in the Homer’s «Odyssey» (8th century BC) amber was mentioned in several songs as a precious material for making ladies’ adornments and for decorating tsars’ palaces.

Amber was highly valued in the Ancient Roman empire. It was used not only for making adornments but also household items: miniature plastics, vessels for wine, incense bottles etc.

During the rule of the emperor Nero (mid 1st century AD) amber was even used for decorating amphitheater where the gladiators’ fights took place: it was plaited into the barrier nets, scattered onto the ring and sedan, it was used to incrust arms.

In Ancient Russia in the 10th – 13th centuries they were also aware of amber and valued adornments made of it. This is confirmed by the excavations carried out in the old Russian cities: Veliky Novgorod, Pskov, Ryazan, Smolensk where amber goods and amber treatment shops were found. Amber was called alatyr in Russia.

In the early 13th century the Teutonic Order conquered the Eastern Baltic that was rich in amber. The Order declared the amber deposits its property and established a monopoly for its extraction and trade. The Baltic citizens could have been tortured and executed through hanging and breaking on the wheel for hiding even a small piece of amber from the authorities. 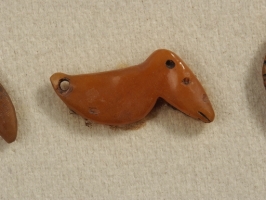 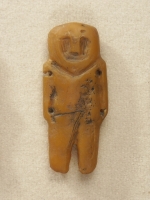 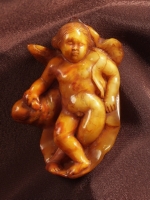