Origin of amber, its properties

The content of this section is revealed through several sub-themes: 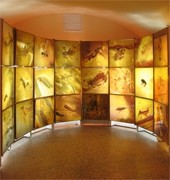 The section is represented by natural collections of amber, distinguishable by weight, colour, and degree of transparency. In the exposition of museum there are some exhibits, which are proofs to the connection of amber with the trees, which produced it – these are inclusions in amber and forms of its pieces. The collection of museum contains over 4000 samples of amber with the inclusions of animals’ and plants’ remains, the age of which is estimated by 10 million years.

There’s a great variety of amber forms. Exposition of museum contains surface allocations of amber in the form of drop, icicle, accumulation on trunk or ground, like, for example, unique, second largest piece of amber in the world, which weighs 4 kg 280 gram; as well as inner-trunk allocations of resin, which produce the amber with the lenticular, falcated and wedge-shaped cross-section.

The diorama reconstructs the picture of «amber wood». The etchings illustrate the legends about amber, and show the portraits of scientists, who made an important contribution to the theory of organic origin of amber.

Amber (the mineralogical term is succinite) is not the single sort of fossilized resins. At present time the scientists discovered and studied over 100 kinds of resins, which differ from amber by their physical and chemical properties (considerably lesser content of siccine acid).

Collection of similar to amber resins is represented by resins from Poland, Rumania, France, Japan, Dominican Republic, Ukraine, Byelorussia, Armenia, Azerbaijan; as well as by the samples of resins from eleven deposits on the territory of Russia.

The part of exposition is devoted to the conditions of amber deposits. The amber bearings of Kaliningrad peninsula had been known for thousands years. All this time the extraction of amber had been carried out by means of gathering it throughout sea beaches.

Only from the middle of 17th century the attempts to develop the deposits by means of excavation started. But these attempts failed because of the absence of well-defined conception on geological structure of the deposit and also due to the imperfect methods of drifting. At the beginning of 19th century the searching and exploitation of amber were made on the north and west of Kaliningrad peninsula. These works proved that amber lie in clay sands with greenish-gray and bluish tint. This tint is given by considerable content of glauconite in the sand. The deposits were given the name of «glaucous grounds ». The depth of «glaucous ground » deposit varies from 10 to 80-100 meters from the surface. This layer is 6-9 meters, and in some places – 14 meters. Accumulation of amber in the «glaucous grounds » is not equal (from 500 to 1500 grams for 1 cubic meter of layer).

Due to technical reasons, the museum is closed today.